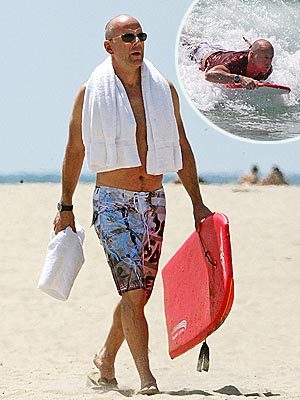 Has there ever been a better time to be Bruce Willis?  For some reason everyone from the Hollywood trades to the NY gossip mags decided to just spend some ink today raving about how awesome he is.  From THR:

A Star Is Shorn.

Action stars may lose their currency as they move into their 50s. But Bruce Willis keeps on raking in the offers.

The star, who turned 54 last month, has been in discussions to shoot and fight his way through three action pics — a thriller for NuImage/Millenium titled “Inventory,” the CIA tale “Red” for Summit and the mob biopic “Scarpa” for Morgan Creek.

And NY Daily News says Willis has reached his “golden age”.  We must agree.  Though his long storied career has occasionally found him in some Hairy situations, His Baldness has come out on top, seemingly shaving the years off like so much scalp fuzz.

NEWS FLASH:  It’s good to be The Bimp.

This entry was posted on Wednesday, May 6th, 2009 at 10:21 am and is filed under Uncategorized. You can follow any responses to this entry through the RSS 2.0 feed. You can leave a response, or trackback from your own site.